One of Newport's major responsibilities as admiral of the voyages to Virginia was to discipline the men under his command. He seems to have done this by persuasion and eloquence, and by example, rather than physical punishment, at a time when whippings and hangings at sea were commonly used by other sea captains to enforce their orders. Captain Newport also treated Indians with respect and attempted to win their cooperation through trading, rather than using physical force to subdue them. Unlike John Smith and other military leaders of the Virginia Colony, he did not attack the Indians or steal food supplies from them, nor did he enslave the Indians as the Spaniards had done routinely in Central and South America.

The English colonists were constantly worried about the possibility that the Spanish would attack their vulnerable settlement. This concern was largely based on an atrocious massacre of French Huguenot colonists by Spanish soldiers, which had occurred in 1565 at Fort Caroline, Florida. The massacre was ordered by Don Pedro Menendez de Aviles, the Spanish governor of Florida, who founded St. Augustine, the first permanent European settlement in North America. Spanish soldiers surprised and easily subjugated the largely unarmed Huguenot settlers. The colonists - men, women, and children - were taken in small groups behind the sand dunes, where each colonist was run through with the sword and left to die. Nearly 350 Huguenot sailors and soldiers, scattered by a prolonged storm at sea, were captured by Menendez's soldiers on the beaches of Florida and also put to the sword. The Spaniards considered the French Huguenots to be infidels because they were not Catholics, but politically, the massacre was intended to warn other Europeans that the New World belonged to the Spanish. 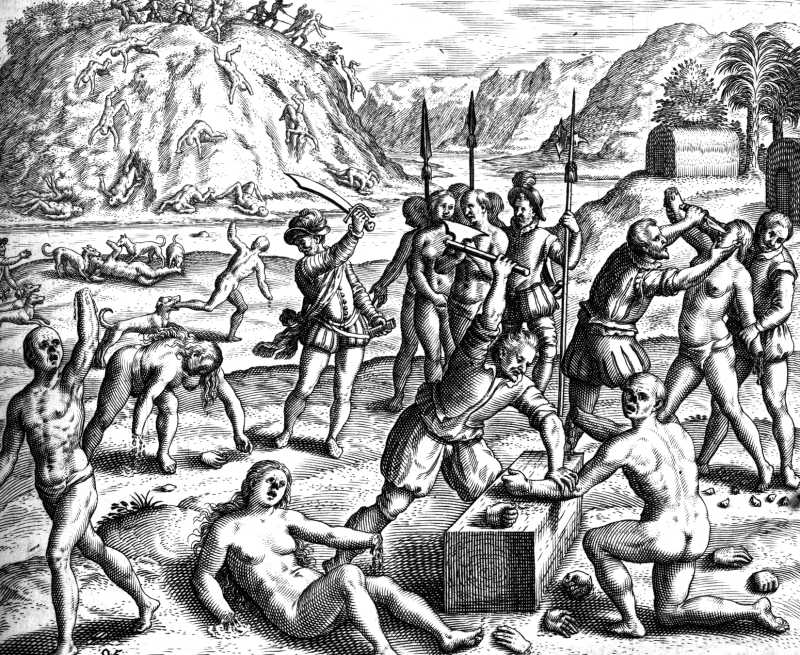 Engraving from 1598 portraying the cruelty of the Spanish conquest of the Indians in the New World.3


To avoid a similar massacre, the English colonists of 1607 were advised by sealed orders from the Virginia Company to build their colony inland, along a river, rather than on the coast of the Chesapeake Bay. The orders further specified that an outpost be established at the mouth of the river manned by lookouts so "that when any fleet shall be in sight, they may come to give you warning." Captain Newport followed the orders of the Virginia Company closely by selecting a site for the colony forty miles upriver from the Chesapeake Bay, on the James River. In addition, he maintained a lookout post located at present-day Old Point Comfot. The lookouts could advise the Jamestown colony of approaching ships by traveling on foot to Jamestown faster than a sailing vessel could sail up the river.

Unlike some leaders of the Virginia Colony or the London Trading Companies who were primarily interested in acquiring wealth quickly, Newport became committed to the long term development of the Virginia Colony. To meet this goal, he left his wife and four children during five dangerous voyages across the Atlantic, each lasting more than six months. He grew up on the sea, and remained at sea most of his life, dying at the end of a long trading voyage to the Far East, on the island of Java, aged fifty-five. In an era where a man was identified by his career, such as carpenter, blacksmith, or priest, Captain Christopher Newport was recognized as a mariner, a man of the sea.

Click here to learn how to purchase the book.